Experience the Exotic Land of Morocco

Travel time from the US is less than travel to Europe

A world class destination that makes you visit more than once

Morocco Destination Management (MDM) is an American Moroccan operator located in the Washington, DC area. We specialize in all types of travel to the kingdom of Morocco.

Whether your travel to Morocco is for leisure or business, MDM management and staff are eager to assist you with your plan to the best of their knowledge, based on honesty, transparency and professionalism.

All of our guides are licensed by the Ministry of Tourism with many years of experiences as tour directors or local guides. In addition, we conduct a yearly inspection of all of our suppliers. All of our services are customized to include but not limited to VIP tours, honeymoons, luxury travel, MICE and small group travel.  We look forward to serving you. 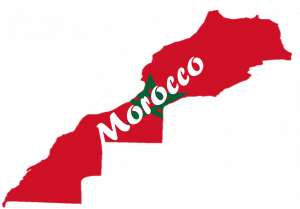 THE KINGDOM OF MOROCCO
Morocco is a constitutional monarchy and has an elected parliament. The country is ruled by a King who has executive and legislative powers, particularly over military, foreign policy and religious matters. The country is located on the Atlantic and Mediterranean oceans across from Spain, a direct 7 hour flight from Washington Dulles International Airport to Casablanca. The country is similar in size and climate to California, and the population is over 34 million. Morocco is a moderate Muslim nation.  Women are well represented in business and government. Alcohol is available and western dress is acceptable within reason. While Morocco is a developing economy, as a popular destination, modern tourist facilities and means of transportation are widely available.

Red with a green pentacle (five-pointed, linear star) known as Sulayman’s (Solomon’s) seal in the center of the flag. Red and green are traditional colors in Arab flags although the use of red is more commonly associated with the Arab states of the Persian gulf. The pentacle represents the five pillars of Islam and signifies the association between God and the nation. The design dates to 1912

WEATHER AND TIME TO GO
Avoid the summer, its very hot, too crowded with local tourists and expensive. I would suggest the following months:
Last week in February, March, April, May, June, September, October, November and first week of December. The weather in those months vary between 65 and 75 during the day and drop down to 40-55 at night.

ELECTRICITY AND VOLTAGE
The voltage in Morocco is generally 220 V, and outlets will fit the two-pin plug known as the Europlug. If your appliance is “dual-voltage”, it should be fine (It’s designed for both 110 and 220 V). If not, you’ll need a power converter as well as an adapter.

HOLIDAYS
The holy month of Ramadan is when Muslims fast during the day time and break the fast at sunset. Most restaurants are closed for lunch (with the exception of those catering specifically to tourists) and things generally slow down. Travelling during this time is entirely possible, and the restrictions don’t apply to non-Muslims, but it’s respectful to refrain from eating, drinking or smoking in public during the fast. At the end of the month is the holiday of Eid al-Fitr, when practically everything closes for as long as a week and transport is packed as everybody heads back home. Alcohol consumption is not prohibited for tourists during Ramadan. There are a few restaurants and bars serving alcohol.

MONEY
The local currency is the Moroccan dirham (Dh or MAD), which is divided into 100 centimes (c). As of  2022, $1 is worth between Dh 9.30 and Dh 9.91. ATMs can be found near tourist hotels and in the modern ville nouvelle shopping districts. Make sure that the ATM accepts foreign cards (look for the Maestro, Cirrus or Plus logos) before you put your card in. Try to have as much small change as possible and keep larger bills hidden separately.

USING YOUR CREDIT OR DEBIT CARD
Morocco has bank ATM’s almost everywhere in major cities. We suggest informing your bank you will be overseas and in which countries you will be using your bank card.

HOTELS AND RIADS
Most hotels in Morocco are independent and they are not internationally rated. The rating is done by the Moroccan Ministry of tourism. The room types are also different. A Double means twin bed which is a smaller size than regular US standard size bed. A Riad is a type of traditional guest house.

SHOPPING
The souks are among the greatest attractions and are full of really great buys including spices, dates, nuts, leather, pottery, carpets and jewelry.